One of the fun tasks in building a Web-based IoT Platform is figuring out ways to connect browsers directly to hardware.

Our first iteration of this concept was through the use of a chrome browser extension which lead to the creation of our Chromebots app. This extension uses chrome's serial API to talk to arduinos and utilizes the johnny-five library. This has been a great way to get started with JavaScript robotics and works anywhere Chrome does, including Chromebooks. Until we get an implemetation of Web Serial, a chrome extension is still the way to go for this. 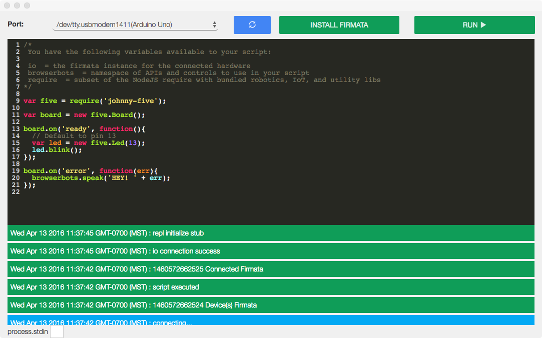 So what other browser-based hardware options do we have?

A newer API being implemented in browsers is WebUSB. While direct browser access to a USB device might sound scary, there's a few precautions in place to keep this secure.

Reilly Grant of Google has put together an adruino library for developing WebUSB peripherals using Arduino Micro or Arduino Leonardo boards. Unlike the Uno or Nano boards, these have the ATmega32U4 chip required for making USB peripherals.

Having the ability to send data back and forth to a piece of hardware is the first step in using JavaScript robotics commonly referred to as nodebots. Typically an Arduino Uno with the StandardFirmata.ino sketch, node.js, node-serialport, and firmata.js are used under the hood by johnny-five as a quick way to get started building nodebots.

Now we can leverage WebUSB as a new transport from the browser!

I've put together a webusb-serial npm module to act as the data transport in place of node-serialport. There's a few things to do to use this. As an example, let's get an Arduino configured and connect it to our PageNodes web-based IoT platform: 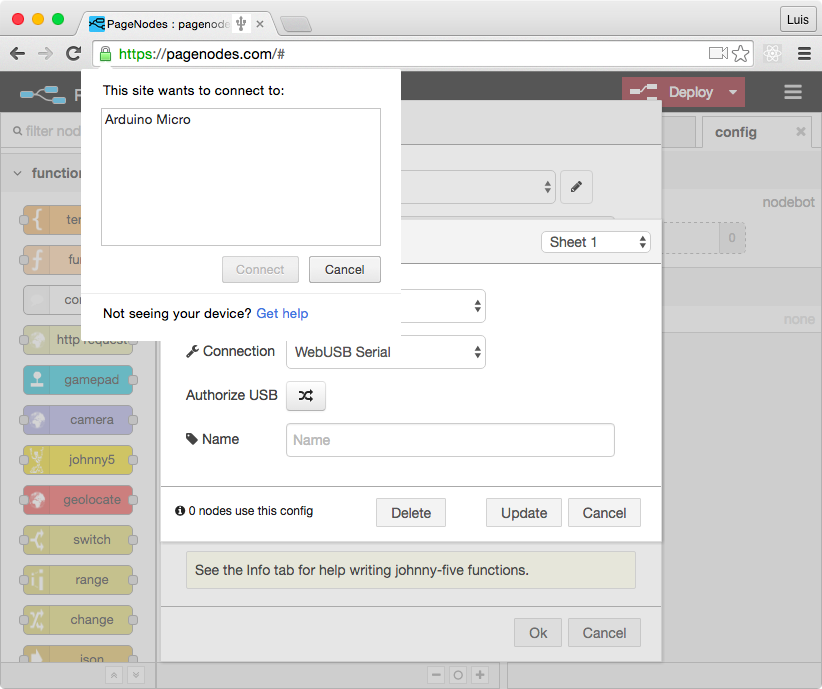 Inside your nodebot function you have full access to the johnny-five API as well as the rest of PageNode's functionality !

The code in your johnny-five node is what executes when the board is ready. You can try something as simple as:

as well as handling input from other nodes:

Here's a demo of it running:

Here's the code used in johnny-five node in the video:

You might have to restart your arduino in order for your pagenodes flow to reconnect to the device. Click the reset button on the device, and reload pagenodes when you deploy changes. Hopefully we'll get that bit sorted soon.

Have a project we can help make awesome?